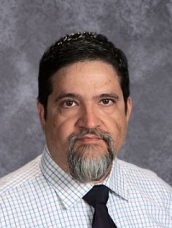 Mr. González was raised in the border town of San Ysidro, California. He attended San Diego State University. At San Diego State University he received his BA in Liberal Studies, a bilingual teaching credential and an MA in Education with a concentration in Policy Studies in Language and Cross Cultural Education with a specialization in Curriculum and Critical Pedagogy. After receiving his MA, Francisco attained his administrative credential which he cleared with the Riverside County Office of Education.

His educational career began in San Diego, where he taught in a bilingual kindergarten classroom and then in a bilingual 5th grade classroom. Afterwards, he moved to Riverside County and worked in Lake Elsinore as a teacher in elementary grades 3, 4, and 5, and then as a middle school teacher. In Lake Elsinore he was also a school site instructional coach before becoming a district instructional coach. Mr. Gonzalez has also served as Principal, Coordinator of Curriculum and Instruction, and English Learner Program Coordinator.

Between 2016-2020 Mr. Gonzalez led as principal in Alvord Unified at Promenade Elementary School. He became principal at Terrace in the Fall of 2020.

Francisco J. González celebrated his 22nd wedding anniversary this year (2021) with his wife Cristina. Francisco and Cristina met in college and have a beautiful 21 year old daughter, Yannett Isabel, which currently attends SDSU.